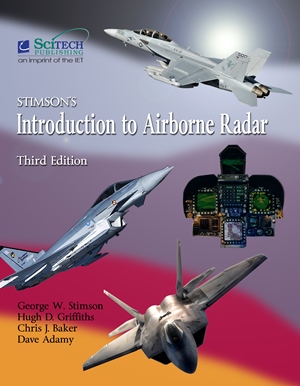 
Completely modernized, greatly expanded, but retaining all the magic of the 2nd edition, Introduction to Airborne Radar has been brought into the 21st century without losing the hallmarks that made George Stimson's previous editions unique. Every chapter has been updated to reflect the constant transformations in radar technology and end-of-chapter exercises have also been added, improving its employment as a textbook.

Over 100 radar and EW experts from around the world were involved in reviewing, writing, and editing this book, each one a longtime user of the previous editions. Each one of them was tasked with making sure this third edition lives up to its legacy of 'Introduction.'

Stimson's is written specifically as an overview without going overboard on the math. Virtually anyone with a knowledge of high school algebra, trigonometry, and physics will be able to read and absorb the vast majority of the material. The first 17 chapters provide fundamentals that can be used by air, ground, and sea-based personnel. Every chapter provides extensive fundamental materials and practical applications, using visual system exemplars to aid explanations. The unique full color layout is enhanced with an immense number of illustrations, figures, tables, and color photographs.

George W. Stimson was the author of Introduction to Airborne Radar (1st and 2nd editions) and served as an engineer on Southern California Edison's frequency-change project before being hired by Hughes Aircraft Company. Working closely with the company's top designers, Stimson observed first-hand the fascinating evolution of airborne radar and with the help from Hughes engineers updated the first edition with 11 new chapters.

Hugh D. Griffiths holds the Thales/Royal Academy of Engineering Chair of RF Sensors within the Department of Electronic and Electrical Engineering at University College London. He has received numerous awards, served as President of the IEEE AESS Society for 2012/13, is a member of the IEEE AESS Radar Systems Panel, and is Editor-in-Chief of the Journal IET Radar, Sonar and Navigation.

Chris J. Baker is the Ohio State Research Scholar in Integrated Sensor Systems at The Ohio State University. He has been actively engaged in radar systems research since 1984 and is the author of over 250 publications. His research covers coherent radar techniques, radar signal processing, radar signal interpretation, electronically scanned radar systems, radar imaging, natural and cognitive echo locating systems. He has won numerous awards for research and holds visiting position at a number of the worlds leading universities.

Dave Adamy is an internationally recognized expert in electronic warfare with 47 years experience as a systems engineer. He has published over 180 articles, has 11 books in print and is a past National President of the Association of Old Crows. For the past 26 years he has run his own company performing studies for the United States Government and defense contractors as well as teaching EW courses worldwide.