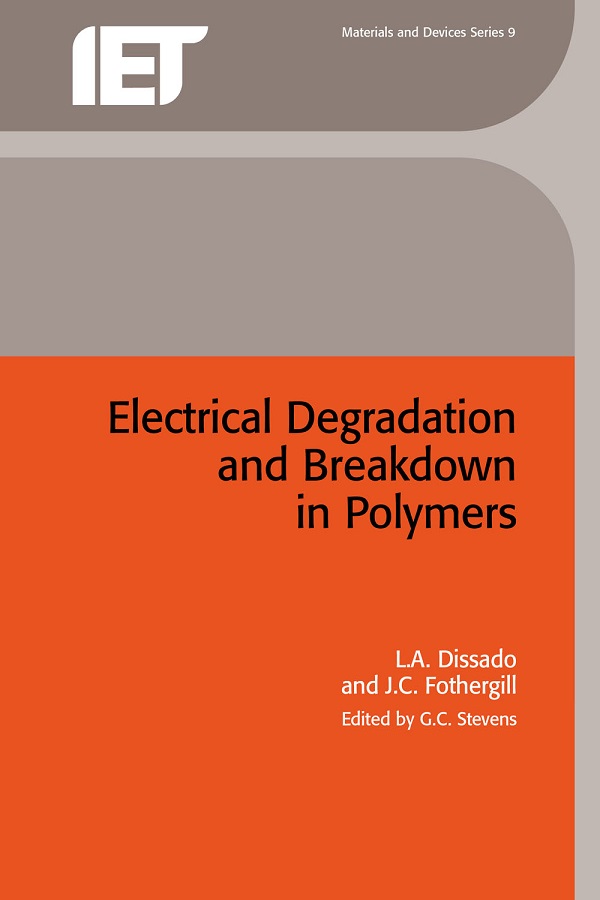 Electrical Degradation and Breakdown in Polymers


Breakdown is fascinating to the scientist and frustrating to the engineer! As well as advancing the scientific and engineering understanding of electrical degradation and breakdown in polymers, this book forms a comprehensive and international review of the state-of-the-art. Topics include: water and electrical treeing; charge transport; 'classical' and filamentary thermal, electromechanical, electronic and partial discharge breakdown models; the stochastic nature of breakdown and statistical characterisation techniques; and engineering considerations for breakdown testing and degradation assessment. The treatment presumes little prior knowledge but develops into an advanced understanding of new concepts such as the fractal-like nature of trees. Although the book is primarily aimed at scientists and engineers practising in the field, a broad introductory section has been included to cater for a wide audience including those new to the subject area. This comprises a description of the nature of the polymers, basic solid-state physics and an introduction to degradation and breakdown.

Len Dissado studied chemistry at University College London, obtaining a First Class degree in 1963 and a PhD in 1966. He subsequently developed the theory of excitons and exciton-phonon interactions in molecular crystals at the Research School of Chemistry, ANU, Canberra, Australia. Since 1977, when he joined the Department of Physics at Chelsea College, University of London, his major interest has centred on the topic of dielectrics. When he became a consultant to Standard Telecommunications Laboratories (STL) in 1981, his interests expanded to cover the field of dielectric breakdown. He has published over 100 scientific papers on a wide range of topics and was awarded the degree of DSc in 1990 by the University of London.

John Fothergill obtained his MSc in 1976 and PhD in 1979 from the School of Electronic Engineering Science, University College of North Wales, Bangor. He then worked for five years at Standard Telecommunication Laboratories on breakdown and degradation in high-voltage polymeric-insulated power cables. This work included advancing fundamental understanding in the field; developing new testing techniques for cables, statistical techniques for the interpretation of test results, and new techniques for jointing and handling cables. In 1984 he joined the Department of Engineering at Leicester University where he continues his research work.

Gary Stevens studied physics at Queen Mary College, London and undertook postgraduate research in solid state physics. He joined the CEGB in 1975 and after a number of appointments in dielectrics and polymer research he led the Nonmetallic Materials Group at the Central Electricity Research Laboratory until 1989. He was then appointed Head of Electrical Sciences Group at National Power plc and he currently heads the Energy Utilisation Research Group. He is a member of the Institute of Physics and the Dielectrics Society, and has served on a number of BSI and CIGRE committees on solid electrical insulating materials. He has published widely in the area of polymer physics and materials science, dielectric material, conducting polymers and electrical breakdown.