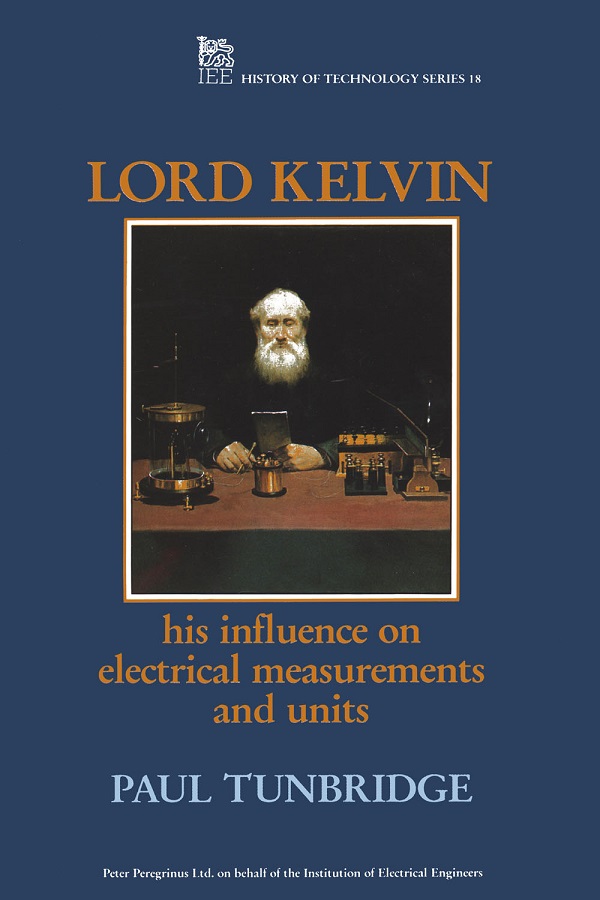 His influence on electrical measurements and units


Lord Kelvin (William Thomson), arguably Britain's most eminent scientist after Newton, spent much of his life in work which led to the development of today's electrical units and standards. Despite his influence, there are few biographies of stature (largely due to the abstruse nature of much of his technical research). This treatment concentrates upon his work in three phases; discovery of the fundamental concepts and coding them into universal laws, leading the adoption of the metric system, and securing worldwide use of units and standards (now the IEC system).

Paul Tunbridge, a Chartered Engineer and member of the Institution of Mechanical Engineers, started his career at RAF Halton and completed his engineering studies at technical Colleges in Cheltenham and Corby. Following war and overseas service and various staff posts, including several years at the Air Ministry, he opted in 1955 for early retirement to become Personal Assistant to the Chief Engineer in the design office of Vickers-Armstrongs (Aircraft), Weybridge. In 1960 he joined the Central Office of the international Electrical Commission in Geneva where he was Head of Linguistic Services before retiring in 1986.

The author's interest in the history of science and engineering standards has extended over many years. He has had a number of papers published in Notes and Records of the Royal Society and elsewhere on Michael Faraday, Lord Kelvin, Benjamin Franklin etc. On three occasions, he received the Prix Robert Harvey from the University of Geneva. His paper 'The first experimental air-cushion machine' - which the author discovered had been invented as far back as 1866 by Professor Marc Thury of Geneva - was jointly published by the Newcomen Society and the Institution of Mechanical Engineers.

As well as gaining first prize in an international competition organised by the Italian National Standards Association (UNI) in 1971 for his monograph on standardization, he received from the British Standards Society in 1987 the Fred Butcher Memorial Award for his paper 'The quality factor in company standardization'.