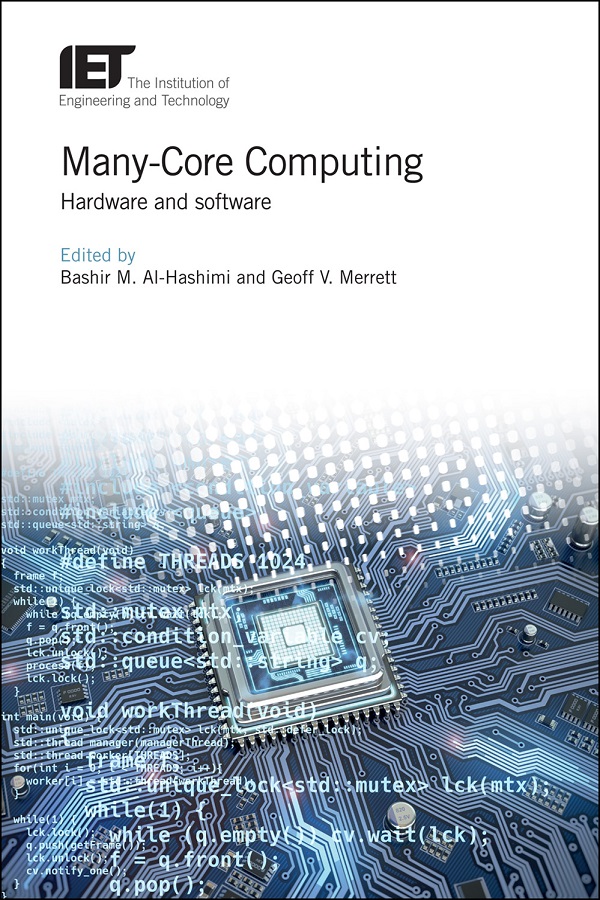 
Computing has moved away from a focus on performance-centric serial computation, instead towards energy-efficient parallel computation. This provides continued performance increases without increasing clock frequencies, and overcomes the thermal and power limitations of the dark-silicon era. As the number of parallel cores increases, we transition into the many-core computing era. There is considerable interest in developing methods, tools, architectures and applications to support many-core computing.

The primary aim of this edited book is to provide a timely and coherent account of the recent advances in many-core computing research. Starting with programming models, operating systems and their applications; the authors present runtime management techniques, followed by system modelling, verification and testing methods, and architectures and systems. The book ends with some examples of innovative applications.

Bashir M. Al-Hashimi is an international leader in the theory and practice of energy-efficient computing, undertaking fundamental and experimental research on hardware-software co-design for energy efficiency and hardware reliability. He is the Dean of the Faculty of Engineering and Physical Sciences, University of Southampton, UK, and founder and co-director of the Arm-ECS Research Centre. He was appointed Commander of the Order of the British Empire (CBE) in the 2018 Queen's Birthday Honours for services to computer engineering and to industry, elected Fellow of the Royal Academy of Engineering in 2013, and Fellow of the Institute of Electrical and Electronics Engineers in 2009. He has received a number of international awards, graduated 40 PhD students, and has published 400 technical papers and five research books.

Geoff V. Merrett is an Associate Professor at the School of Electronics and Computer Science at the University of Southampton, where he is head of the Centre for Internet of Things and Pervasive Systems. He is internationally known for his research into the system-level energy management of mobile and self-powered embedded systems, and he has published around 170 journal and conference papers in these areas. He was a co-investigator on the £5.6M PRiME Programme Grant on runtime power and reliability management of many-core systems, where he led the applications and cross-layer interaction theme. He was General Chair of the European Workshop on Microelectronics Education in 2016, is an Associate Editor for IET CDT, and is a member of the IET and IEEE.