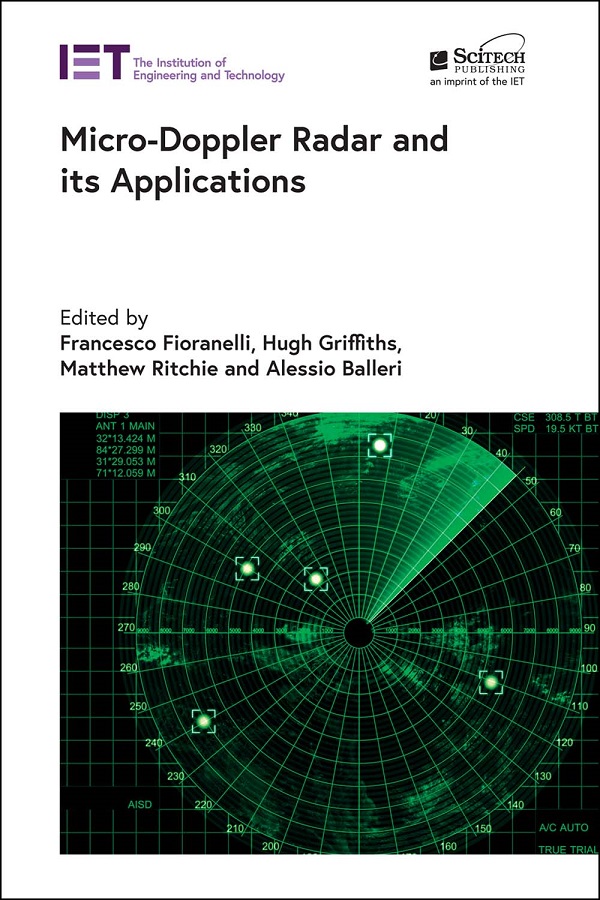 Micro-Doppler Radar and its Applications


This book covers the latest developments in radar micro-Doppler signatures and non-cooperative recognition of moving targets, for researchers and advanced students of radar systems. Micro-Doppler signatures is a very broad topic with applications in healthcare, security and surveillance. Edited by leading researchers in the field, the book consists of a series of chapters with contributions from different groups of authors who are international experts on their topics.

Francesco Fioranelli is an assistant professor in the Microwave Sensing Signals and Systems (MS3) section, Department of Microelectronics, at the Delft University of Technology. He is a senior member of the IEEE, recipient of the 2017 IET Radar, Sonar & Navigation best paper award, Associate Editor for IET Electronic Letters and IET Radar, Sonar & Navigation. His research interests include distributed radar and radar-based classification.

Hugh Griffiths holds the THALES/Royal Academy Chair of RF Sensors in the Department of Electronic and Electrical Engineering at University College London, England. He is a fellow of the IET, fellow of the IEEE, and in 1997, he was elected to fellowship of the Royal Academy of Engineering. He is an IEEE AES Distinguished Lecturer. He has been a member of the IEEE AES Radar Systems Panel since 1989.

Matthew Ritchie is a lecturer at UCL in the Radar Sensing group. He currently serves as the chair of the IEEE Aerospace and System Society (AESS) for United Kingdom and Ireland, associate editor for the IET Electronics Letters journal and chair of the UK EMSIG group. He was awarded the 2017 IET Radar, Sonar & Navigation best paper award as well as the Bob Hill Award at the 2015 IEEE International Radar Conference.

Alessio Balleri is a reader in radar systems with the Centre of Electronic Warfare, Information and Cyber at Cranfield University. From June 2004 to December 2004, he was a visiting research scholar with the Department of Electrical and Computer Engineering at University of Illinois at Chicago. He was the Technical Program Committee Co-Chair for the IET International Radar Conference 2017 (Belfast, UK) and the Technical Co-Chair of the 2020 IEEE International Radar Conference (Washington, DC, USA). His research interests include radar signal processing and biologically inspired radar and sonar systems.