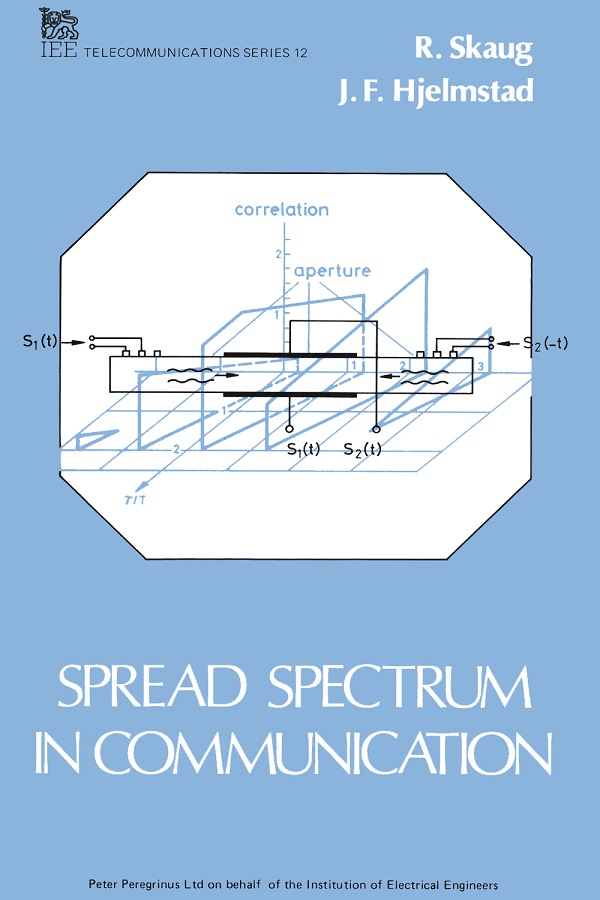 
The book is devoted to advanced radiocommunication, discussing the merits and operational aspects of spread spectrum signalling. Spread spectrum modulation is emerging as one of the most important tools for combatting a wide range of problems usually encountered in radiocommunication. For military applications the signalling is able to resist difficulties deliberately introduced by an enemy, such as jamming and eavesdropping. For civil application, the efficient signal multiplexing and multipath rejection capability is of great interest. The price paid however is the need for very complex processing of the radio signals. This task put great challenges on new technologies and design, and it is only recently that operational systems have started to emerge from the laboratories.

The book starts by comparing spread spectrum modulation and conventional modulation methods, and then discusses demodulation, which requires both special acquisition and synchronisation techniques. The electronic warfare scenario is introduced, discussing the principles of various spreading techniques and possible countermeasures. The coding for bandwidth spreading in a direct sequence spread spectrum system is treated by discussing the most common codes and their different figures of merit with respect to multipath, code division multiplexing and signal concealment. The book also illustrates the possible benefits, as well as limits to the use of new hardware technology to accomplish the various functions necessary for successful operation of a spread spectrum system. The effect of the propagation environment on spread spectrum is treated both analytically and through reported experiments and simulations. Finally the book considers the task of designing a complete communication network and discusses the usefulness and technology for additional interference suppressing techniques suitable to work with spread spectrum systems.

Reidar Skaug was born in Norway in 1949. He received the B.Sc. (Honours) degree in electrical and electronic engineering from Heriot Watt University, UK in 1972 and the Diploma in Business Administration from North European Management Institute, Norway in 1973. He joined the Norwegian Defence Research Establishment (NDRE) as a research scientist in 1974 after having completed his national service as a technical instructor in the Norwegian Navy. At NDRE he has worked as a project manager for several projects involving spread spectrum communication systems. He was awarded a Canadian Defence Research Fellowship in 1981 and spent one year at the Communication Research Centre, Ottawa. In September 1982 he was appointed Assistant Head of Division, Division for Electronics, NDRE. He has published and presented several papers in the field of spread spectrum communication. Mr Skaug is a Norwegian representative to the NATO AGARD Electromagnetic Wave Propagation Panel and is a Member of the IEE.

Jens Hjelmstad was born in Gudbrandsdalen, Norway. He graduated from the Norwegian University of Technology, Trondheim in 1979 with a thesis on the detectability of targets against sea background. From 1979 to 1980 he worked at the Norwegian Defence Research Establishment with high speed spread spectrum communication systems. In 1980, he joined the Environmental Surveillance Technology Programme of the Royal Norwegian Council for Scientific and Industrial Research. His research interests lie in the area of new radio science concepts utilising space, time and polarisation processing.