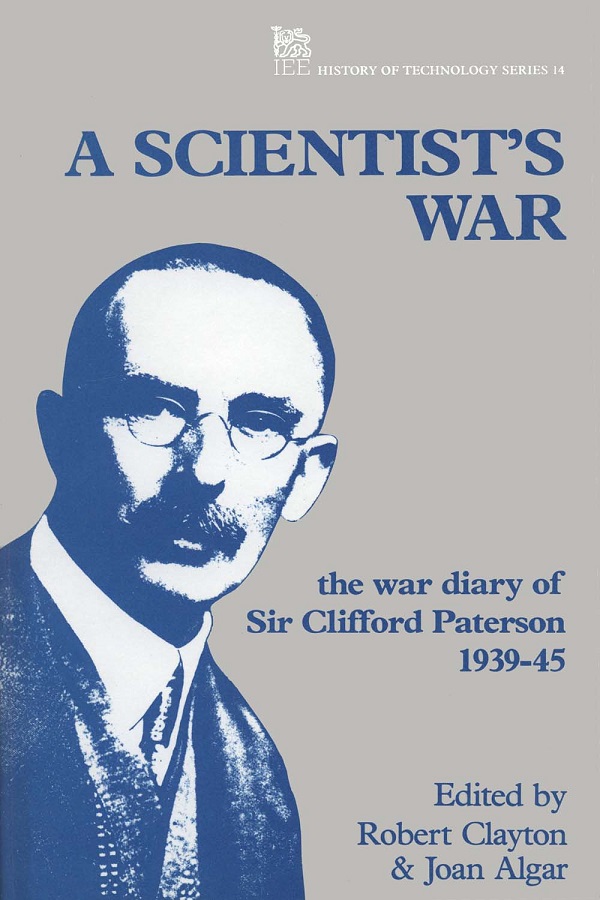 
Sir Clifford Paterson, OBE FRS, was Director of the GEC Research Laboratories at Wembley from their foundation in 1919 until his death in 1948. This book contains the daily diary which he kept from the beginning of September 1939 until May 1945.

These were the years of the Second World War, and Paterson records work in the Laboratories and his own wider role in the planning and organisation of the scientific war effort, against the background of the progress of the war, on one hand, and on the other, the personal problems of members of his staff. There are also references to the administration and housekeeping which were necessary for the smooth running of the Laboratories.

There are accounts of visits from, and discussions with Ministers, senior Service officers, and officials in government departments and research establishments. There are comments on the contributions that such people were making and, on occasion, references to the delaying effects of some rivalries and bureaucracy. Paterson expresses opinions on the proper roles of government, the universities, and industry in both war and peace.

The diary outlines the progress and frustrations on the wide variety of projects undertaken by the Laboratories, including the development of the cavity magnetron, airborne radar, radio countermeasures, centimetre wave propagation, visibility of and from aircraft, and many others, as well as support for the industrial war effort through, for example, development of diamond dies and a statistical approach to quality control. A recurring theme is the development and production in the Laboratories of more than 300,000 thermionic valves of 45 new types.

The diary is supplemented by an introduction, a chronology of world events, a number of appendices, and explanatory footnotes to many entries. The diary is an important historical document and will be of great interest to political and social historians, as well as those interested in the history of science.