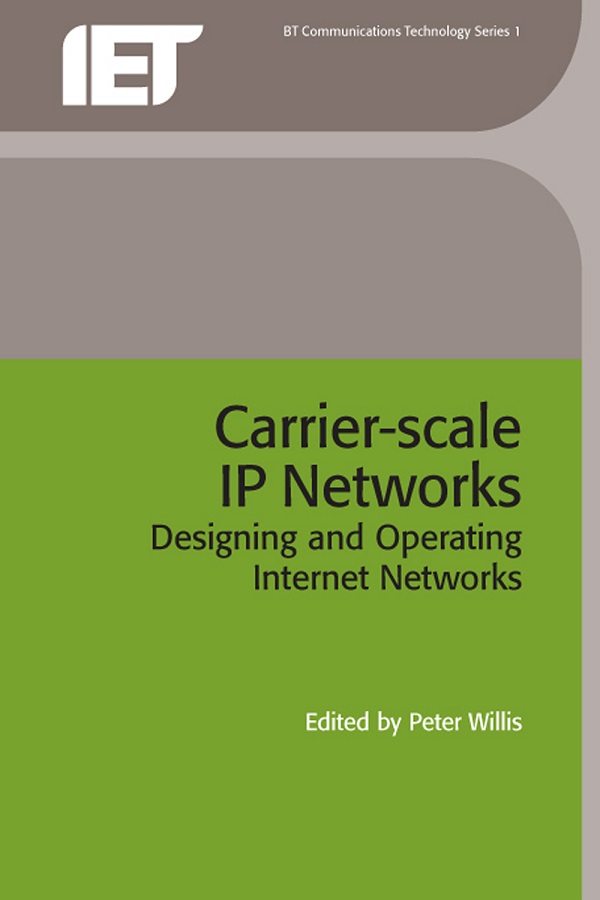 
Communications networks are now dominated by Internet protocol (IP) technologies. Every aspect of networking, from access to the core network to the surrounding operational support systems, has been radically affected by the rapid development of IP technologies. This book comprehensively reviews the design, provision and operations of carrier-scale Internet networks. A good balance between leading edge technology and many of the practical issues surrounding carrier-scale IP networks is presented, including: the challenges in building and scaling a carrier-scale IP network, how to physically build and maintain Points of Presence (PoP) around the world, core transmission networks for the new millenium, delivery of IP over broadband access technologies and wireless access, dial access platform, an overview of satellite access networks, operations for the IP environment, operational support systems for carrier-scale IP networks, IP address management, traffic engineering, and IP virtual private networks. This makes for essential reading for telecommunications engineers and managers, researchers and postgraduate students in this rapidly changing area of communications technology.

Peter Willis joined BT in 1988 after obtaining an MEng in Electronic Systems Engineering from the University of York. His early work in distributed computing included the development of an ISDN IP router and the design of BTnet's first public Internet network, BTnet. He installed on of BTnet's first two PoP's in August 1994. He moved on to become the network manager for BTnet from the BT Network Operations Centre. He saw a huge growth of the BTnet team in the period from 1994 to 1998 and an expansion in IP services. Over this period, as well as growing, operating and fixing the network, he developed some unique network management tools. In 1998 he returned to Adastral Park and ensured the lessons learned form designing and operating IP networks since 1993 were applied to BT's and Concert's designs, new emerging protocols, and architectures. He now works for BTexact Technologies, BT's advanced communication technologies business, providing consultancy and strategic analysis on all aspects of IP networks.