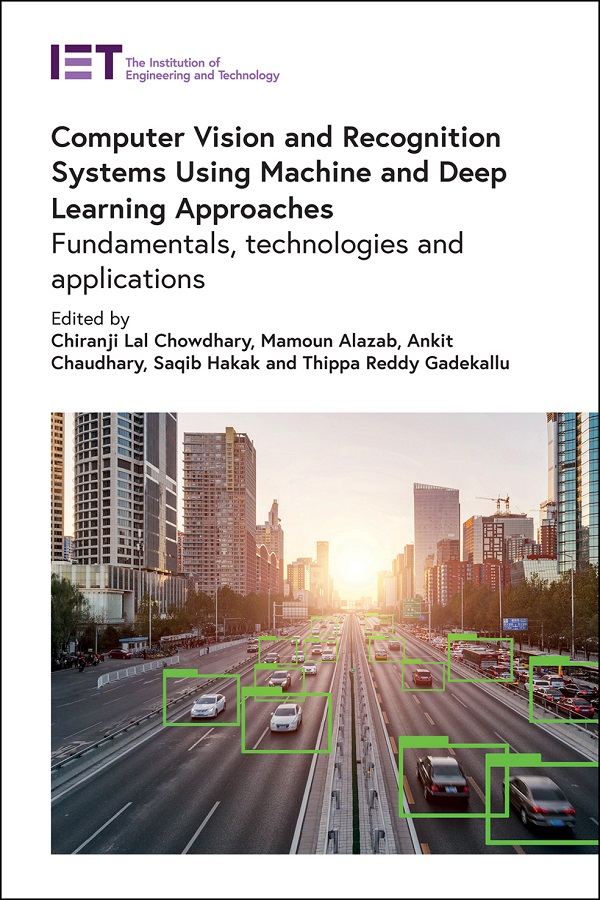 
Computer vision is an interdisciplinary scientific field that deals with how computers obtain, store, interpret and understand digital images or videos using artificial intelligence based on neural networks, machine learning and deep learning methodologies. They are used in countless applications such as image retrieval and classification, driving and transport monitoring, medical diagnostics and aerial monitoring.

The book will be useful for industry and academic researchers, scientists and engineers in the fields of computer vision, machine vision, image processing and recognition, multimedia, AI, machine and deep learning, data science, biometrics, security, and signal processing. It will also make a great course reference for advanced students and lecturers in these fields of research.

Chiranji Lal Chowdhary is an associate professor in the School of Information Technology and Engineering at VIT University, where he has been since 2010. He received a B.E. (CSE) from MBM Engineering College at Jodhpur in 2001 and M.Tech. (CSE) from the M.S. Ramaiah Institute of Technology at Bangalore in 2008. He received his Ph.D. in Information Technology and Engineering from the VIT University Vellore in 2017. From 2006 to 2010, he worked at M.S. Ramaiah Institute of Technology in Bangalore, eventually as a Lecturer. His research interests span both computer vision and image processing. Much of his work has been on images, mainly through the application of image processing, computer vision, pattern recognition, machine learning, biometric systems, deep learning, soft computing, and computational intelligence. He has given few invited talks on medical image processing. He is the editor/co-editor of five books and is the author of over 40 articles on computer science. He filed two patents deriving from his research.

Mamoun Alazab is an associate professor at the College of Engineering, IT, and Environment, Charles Darwin University, Australia. His multidisciplinary research in cyber security and digital forensics focuses on cybercrime detection and prevention including cyber terrorism and cyber warfare. He works closely with government and industry on projects including IBM, the Australian Federal Police (AFP), the Australian Communications and Media Authority (ACMA), the United Nations Office on Drugs and Crime (UNODC), and the Attorney General's Department. He is a Senior Member of the IEEE and founding chair of the IEEE Northern Territory (NT) Subsection. He holds a Ph.D. degree in Computer Science from the School of Science, Information Technology, and Engineering, Federation University of Australia.

Ankit Chaudhary is an assistant professor at the Department of Computer Science, University of Missouri at Saint Louis, USA. His research focuses on data science, computer vision and cyber security. He has authored three books. He is an associate editor and on the editorial board of several International Journals. He is a member of the IEEE. He received his Ph.D. degree in Computer Engineering from CSIR-CEERI, India.

Saqib Hakak is an assistant professor at the Canadian Institute for Cybersecurity, the University of New Brunswick, Fredericton, Canada. His current research interests include fake news detection, security and privacy, anomaly detection, natural language processing, and applications of AI. He has worked on numerous industrial projects involving IBM Canada, and TD Bank, Bell Canada. He received a complimentary ACM professional membership based on his services to the research community. He holds a Ph.D. degree from the Faculty of Computer Science and Information Technology, University of Malaya, Malaysia.

Thippa Reddy Gadekallu is an associate professor at the School of Information Technology and Engineering, VIT, Vellore, India. His areas of research include machine learning, deep neural networks, internet of things, and blockchain. He holds a Ph.D. degree in Data Mining from VIT, India.