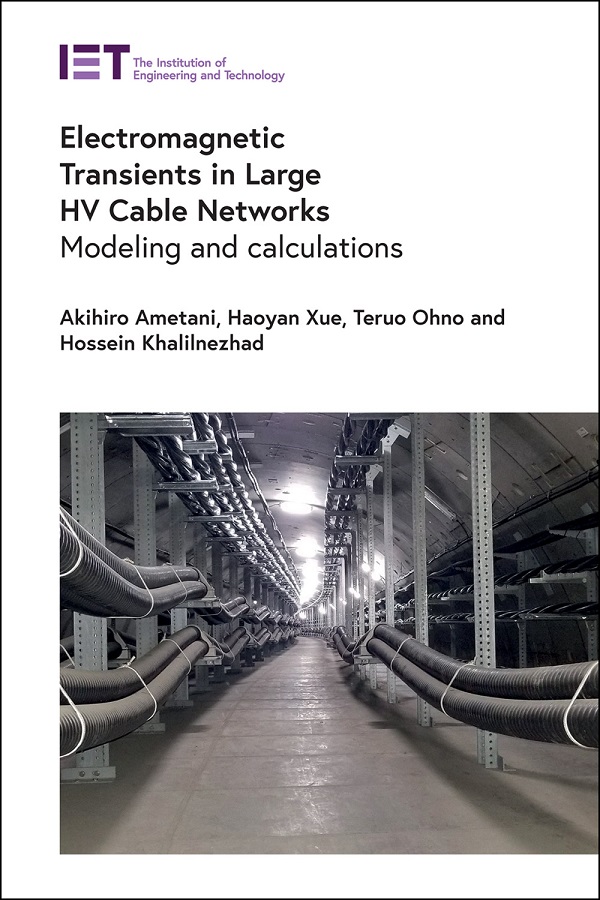 
Transient events are short-lived bursts of energy in a system resulting from a sudden change of the state. They can be caused by faults, switching events or sudden changes in generation and load. Given the need to expand HV cable grids and to interconnect national grids to increase grid flexibility, the effects of such transients need to be understood in order to maintain the security of power supply and power quality.

This book presents an overview of formulas to model transients in cable systems based on complete solutions of Maxwell's equations. It presents solutions to particularly model important high frequency phenomena. The impedance and admittance at a very low frequency for HVDC systems are investigated. In addition, the modeling methods of underground cables created in the Electromagnetic Transients Program (EMTP) are described. Moreover, the wave propagation characteristics of overhead lines and underground cables, and steady-state and transient behaviour of three-phase cables are further investigated in this book. Finally, transients in large interconnected HV cable networks in Denmark and the Netherlands are presented as case studies.

Akihiro Ametani is an Adjunct Professor at the University of Manitoba, Canada. He is a CIGRE Distinguished member, and an IEEE Life Fellow. Previously, he was with Bonneville Power Administration, and a Vice-President of the IEE Japan. His research topics include finite difference time-domain analysis, earthing and lightning protection, poles and towers, substations, and transmission lines.

Haoyan Xue is currently with the African Office of Global Energy Interconnection Development and Cooperation Organization, Global Energy Interconnection Group Co. Ltd., and he is also a Research Associate with the Polytechnique Montréal. He received his B.Eng. in Electrical Engineering and its Automation from Hunan University, China in 2010; his M.Sc. in Electrical Engineering from Delft University of Technology, The Netherlands in 2012; and his Ph.D. in Electrical Engineering from Polytechnique Montréal, Canada, in 2018. From 2013 to 2015, he was employed by the State Grid Corporation of China (SGCC) in Yinchuan, Co., working on protections, relays, and SCADA systems of substations.

Teruo Ohno has been with the Tokyo Electric Power Company, Inc, since 1996, where he has been involved in various power system studies including the transient analysis of cable systems in different countries. He received his B.Sc. degree from the University of Tokyo, Tokyo, his M.Sc. degree from the Massachusetts Institute of Technology, Cambridge, and his Ph.D. degree from the Aalborg University, Aalborg, all in Electrical Engineering, in 1996, 2005, and 2012, respectively. He served as a secretary of Cigré WG C4.502, which focused on technical performance issues related to the application of long HVAC cables.

Hossein Khalilnezhad is currently working as Senior Grid Strategist at the Asset Management department of the Dutch-German transmission system operator, TenneT TSO BV. He received his B.Sc. degree in 2010 from the Shiraz University of Technology, Iran, and his M.Sc. degree in 2013 from the Delft University of Technology, the Netherlands, both in Electrical Engineering. From 2013 to 2018, he was working toward his Ph.D. degree in Electrical Power Engineering at the Delft University of Technology, the Netherlands, where he studied the technical performance of (E)HV underground cable systems within the scope of the Dutch 380 kV cable research program. He worked from 2018 to 2021 for the Stedin Group as one of the largest distribution system operators in the Netherlands, where he served as Grid Analyst and Strategist at the Asset Management Department.