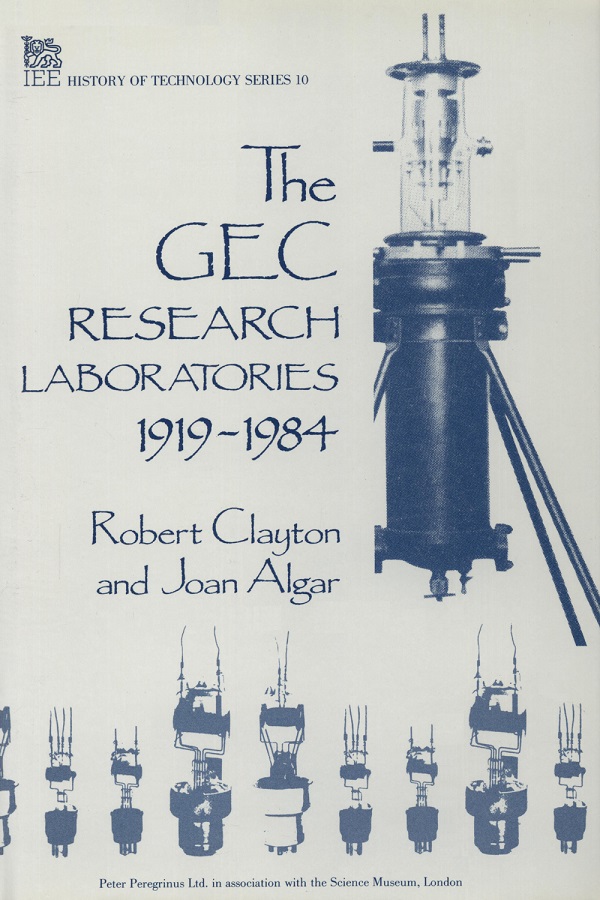 
The Research Laboratories of the GEC were conceived in 1916, started work in 1919 and moved to their well-known buildings in Wembley in 1922.

This book deals with their activities from the beginnings until the end of 1984. The opening chapter describes their origins, organisation and philosophy, describing particularly the pattern set by Sir Clifford Paterson, the first Director, much of which was to continue after his death in 1948. The second chapter summarises the work of the Laboratories, decade by decade, while subsequent chapters are a series of essays covering particular subjects such as lamps and lighting, valves, communications and semiconductors. The diverse number of projects undertaken in the 1939-45 war are described, and other chapters deal with the substantial work on solid state physics in the 1950s and 1960s, the work on optical fibres and optical communications in the 1970s and 1980s, the many aspects of work on technology and engineering, and the vital supporting role of the work on materials characterisation. The final chapters deal with patents, publications and some statistics on the Laboratories.

Sir Robert Clayton CBE joined the scientific staff of GEC Research Laboratories in 1937 to work on television. After working there on radar and microwave communications he was a founder member, and later Manager, of the GEC Applied Electronics Laboratories. He was Managing Director of GEC Electronics from 1961 to 1966, and then became GEC Technical Director, a post which he held until he retired in 1983. He has been President of the Institution of Electrical Engineers and of the Institute of Physics and a Vice President of the Fellowship of Engineering. He has served on a number of government bodies and is at present a member of the University Grants Committee and of the Monopolies and Mergers Commission.

Mrs Joan Algar held a variety of posts in the GEC Research Laboratories before taking charge of the Registry which handled reports on aspects of their work. She later became Information Officer for the Laboratories and for the GEC Technical Directorate. In this latter appointment she was responsible for publications, displays and other information presenting the work of the Laboratories and innovation in the company to customers, staff and potential recruits. She now works part time at the Laboratories and is particularly concerned with their history and archives.