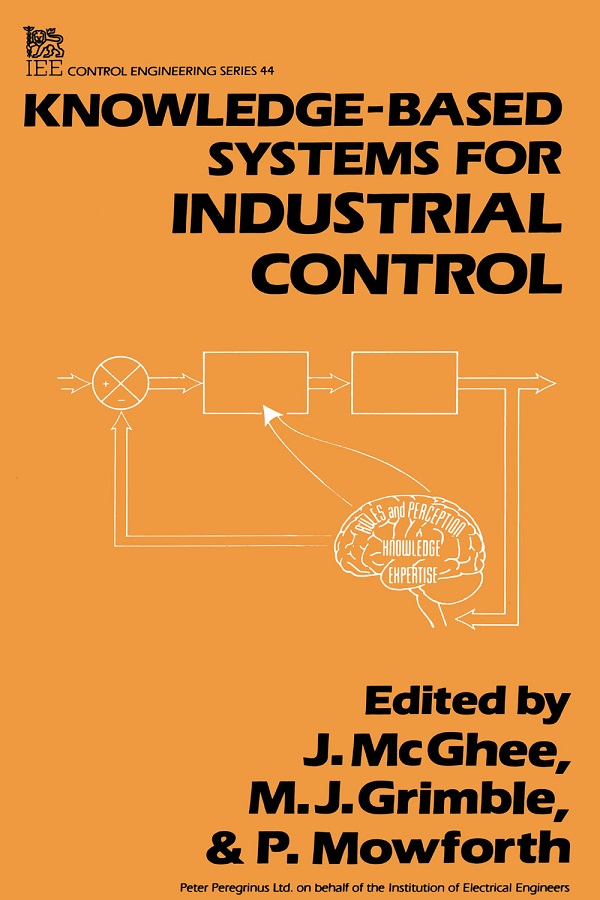 
Expert and knowledge-based systems have great potential for industrial control systems, particularly in the process industries. Recognising the importance of this emerging area, the Institution of Electrical Engineers organised a Vacation School on the subject, for engineers from industry and academia, at the University of Strathclyde in September 1990.

The background material presents knowledge based control from the perspective of Systems Engineering and Information Technology. When combined with an introduction to both artificial intelligence and fuzzy logic, a firm foundation is laid for consolidation of the later material of the book.

The importance of fuzzy control is considered and the use of expert systems in self-tuning control is discussed. The use of real-time knowledged based systems in Fermentation supervisory control is described and the impact of neural networks in process modelling is also considered. The development of COGSYS which is an environment for building expert systems and its applications is described, together with its application to a gas processing plant.

Case studies in condition monitoring are presented. The development of qualitative models for physical systems which is currently attracting considerable interest from the Al community is considered. The design of multivariable control systems and other aspects of process control are also covered.

Joseph McGhee was born in Lanarkshire in 1940. He entered the University of Strathclyde as a mature student where he graduated with First Class Honours in Electronic and Electrical Engineering in 1966. Mr. McGhee is a Chartered Engineer, a member of The Institution of Electrical Engineers and a member of the Institute of Measurement and Control. Since 1968 he has been at the University of Strathclyde, where he is a Senior Lecturer in the Industrial Control Unit, Department of Electronic and Electrical Engineering. His research interests cover the fields of measurement and control, measurement education, soil density measurement, linear time-varying systems, systems identification, and semiconductor device simulation. He presented the invited keynote paper at the IMEKO Symposium on Microprocessors in Temperature and Thermal Measurement held in Lodz, Poland, in May 1989. As an industrial consultant, he has assisted companies which manufacture electrical drive control systems, biological and biochemical screening instrumentation and the development of power semiconductor devices.

Michael Grimble was born in 1943 in Grimsby. He has a first class BSc honours degree in Electrical Engineering, the MSc (1971), PhD (1974) and DSc (1982) degrees in control engineering from the Univeristy of Birmingham, and a BA degree in Mathematics from the Open University. In 1976, he joined the Department of Electronic & Electrical Engineering at Sheffield City Polytechnic first as a Senior Lecturer and then in 1979 as Reader. The University of Strathcfyde, Glasgow, appointed him to the Professorship of Industrial Systems in 1981, where he is now the Director of the Industrial Control Unit. He is a Director of Industrial Systems and Control Ltd., and is the Technical Director of the Department of Trade & Industry supported Industrial Club on Advanced Control Technology. He is the Vice chairman of the Control Theory Committee IFAC, the Chairman of the IEEEE CSS International Committee, and serves on the Board of Governors of the IEEE CSS and of the Theory Committee of the Institute of Mathematics and its Applications. He is the Managing Editor of the Journal Adaptive Control & Signal Processing and Robust and Nonlinear Control. He is the editor of the Prentice Hall International series of books on Systems and Control Engineering and on Signal Processing. He is the General Chairman of the IFAC Working Group on Adaptive Systems in Control and Signal Processing.

Peter Mowforth was born in Sheffield, England in 1953. He studied Neurophysiology and Physics in London and then moved to Cambridge to study human psychophysics and neurophysiology. He gained a PhD from Sheffield on the requirements and constraints for human stereo vision. He went to Edinburgh's Machine Intelligence Research Unit in 1982 to investigate the role of induction in 2D vision systems. In 1983, the Turing Institute was formed and the group moved to Glasgow. Since that time, he has been one of the Institute's Directors and has had overall responsibility for a wide range of commercial and basic research projects in the areas of computer vision and advanced robotics in addition to providing a wide base of consultancy for many international companies. He has published over 40 recent articles in artificial intelligence whilst maintaining a particular interest in the representational requirements for early visual processing. The author is a member of the British Computer Society and the IEEE, Chairman of the British Computer Society (Scottish branch), academic editor of Turing Institute Press and is the organiser and chairman of the First International Robot Olympics held in Glasgow in 1990.