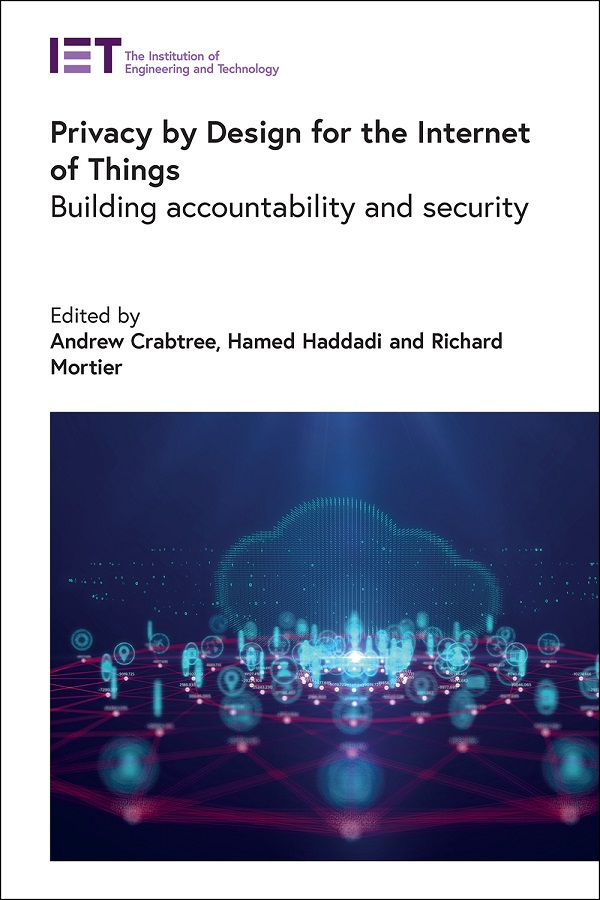 
Privacy by design is a proactive approach that promotes privacy and data protection compliance throughout project lifecycles when storing or accessing personal data. Privacy by design is essential for the Internet of Things (IoT) as privacy concerns and accountability are being raised in an increasingly connected world. What becomes of data generated, collected or processed by the IoT is clearly an important question for all involved in the development, manufacturing, applications and use of related technologies. But this IoT concept does not work well with the 'big data' trend of aggregating pools of data for new applications. Developers need to address privacy and security issues and legislative requirements at the design stage, and not as an afterthought.

In this edited book, the authors draw on a wealth of interdisciplinary research to delineate the challenges of building accountability into the Internet of Things and solutions for delivering on this critical societal challenge. This advanced book brings together legal-tech scholars, computer scientists, human computer interaction researchers and designers and socials scientists to address these challenges and elaborate solutions. It articulates the accountability principle in law and how it impacts IoT development, presents empirical studies of accountability in action and its implications for IoT development, brings technological responses to the requirements of GDPR and ways of building accountability into the IoT, and covers compliant IoT application development, privacy-preserving data analytics, human-centred IoT security, human-data interaction, and the methodological challenge of understanding and responding to the adoption of future technologies in everyday life.

Andrew Crabtree is a professor in the School of Computer Science at the University of Nottingham, UK. A sociologist by background, he started working with computer scientists and software engineers when he did his PhD with John Hughes at Lancaster University, UK. He has championed the use of ethnography in systems design and has been working on shaping computing around the social world for the last 25 years.

Hamed Haddadi is a reader in human-centred systems at the Dyson School of Design Engineering at The Faculty of Engineering, Imperial College London. He leads the Systems and Algorithms Laboratory, is a Security Science Fellow of the Institute for Security Science and Technology, and an Academic Fellow of the Data Science Institute. He is also a Visiting Professor at Brave Software where he works on developing privacy-preserving analytics protocols. He completed his PhD at University College London and the University of Cambridge University Computer Laboratory.

Richard Mortier is a professor in the Computer Laboratory at the University of Cambridge, UK. He has previously worked in a variety of roles, including academic research, Internet platform architecture, and networked system implementation. He has also consulted and worked for a broad range of companies, including start-ups and corporates in both the US and UK. He works at the intersection of systems and networking with human-computer interaction.